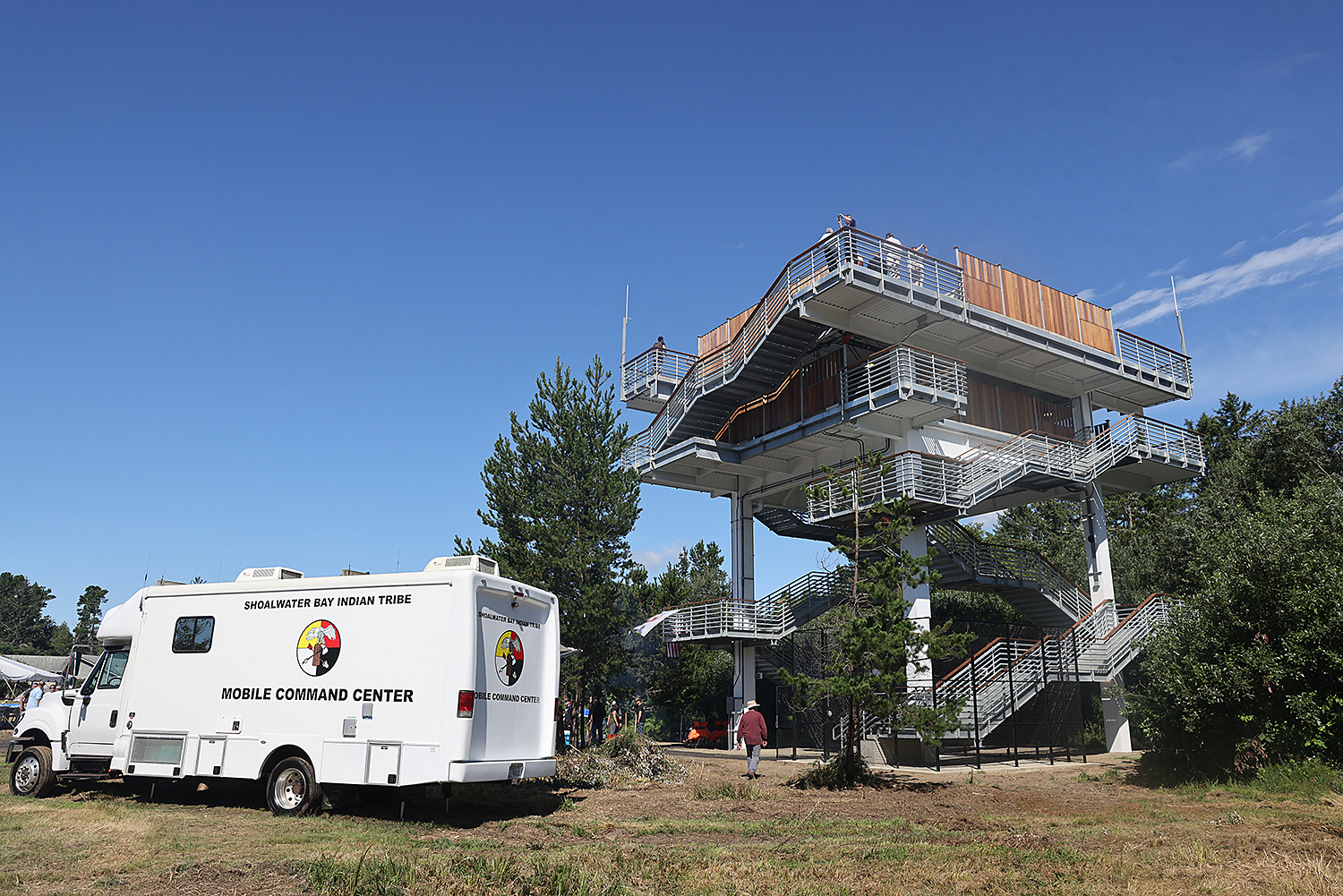 A new tsunami vertical evacuation tower in Tokeland is the first of its kind in the United States, built by the Shoalwater Bay Indian Tribe not just for the few dozen tribal members living near it, but the entire nearby community.

If a big earthquake were to occur, the community would be able to walk to the tower in 15 to 20 minutes. Tsunami inundation maps show the first waves from a Cascadia Subduction Zone earthquake may arrive in 35 minutes, making the tower a true tsunami refuge.

“There are 100 or less Tribal people who need this tower, right?” noted Maximilian Dixon, the hazards and outreach program supervisor for the Washington Emergency Management Division. “And you are looking at a 400-plus capacity. Putting all of your money and time and passion to save not only your own community, but the community next to you. That’s powerful.”

State, local and federal partners joined with the Shoalwater Bay Indian Tribe on Aug. 5 to celebrate and dedicate the tower to Lee Shipman, the former emergency manager for the tribe. The tower is named “Auntie Lee” in her honor as she was the driving force to get the funding for the vertical evacuation tower. The tower, located on the coast of Washington near Tokeland, was built by the Shoalwater Bay Indian Tribe using their funds and a FEMA grant.


“Lee did the work,” said Shoalwater Bay Indian Tribal Chairwoman Charlene Nelson. “She kept us on track and it worked and it could work in any community. Working together with the tribe and people outside of the tribe, it makes such a big difference.”

“We helped to change the atmosphere from being helpless victims into one of knowing we can and will survive if we all work together,” Shipman said.

Officials say they hope this free-standing vertical evacuation tower is the first of many. A second tsunami refuge exists above a school gymnasium in Ocosta, about 13 miles away from Tokeland. And two more towers are in the planning stages in Ocean Shores and Westport. According to expert modeling, more than 50 tsunami refuges are needed along the Washington coast in the event of an earthquake and tsunami along the Cascadia Subduction Zone fault.

The platform in Tokeland can hold more than 400 people — enough for the entire local population.

“This tower will save our lives someday,” added Lynn Clark, secretary of the Shoalwater Bay Indian Tribe.

The tower stands 50 feet tall, 40 feet wide, with support piers anchoring it 55 feet below grade. There are two decks, one at 40 feet and the other at 50 feet in height, each deck being 2,000 square feet in size. Structurally, the tower engineering can hold people shoulder to shoulder without compromising its structural integrity, said current Shoalwater Emergency Manager Ken Ufkin.

The tower was built on the southern edge of the Shoalwater Bay Indian Tribe Reservation. The tribe decided on this area as it is approximately in the middle of Tokeland. Thus, it can serve as a place of refuge for not only tribal members, but the residents of Tokeland as well, Ufkin said.

Ufkin said the tribe contributed about $1.2 million for the tower and a FEMA grant covered more than $3 million.

Members of the state Department of Natural Resources and the Washington Emergency Management Division walk up the stairs of the vertical evacuation structure.

Robert Ezelle, the director of the Washington Emergency Management Division, noted he would be looking to the Shoalwater Bay Indian Tribe for advice as more tsunami towers are built along the coast. Ezelle and Maj. Gen. Bret D. Daugherty of the Washington Military Department said during a trip to Washington, D.C., they helped encourage FEMA to change grant designations so they could start funding these towers. The tribe was the first to successfully get the funds.

“We’re not going to rest with just this,” Ezelle said. “We’re going to press forward and partner with our tribal nations, with our local jurisdictions and build others up and down the tsunami hazard zones. And as we work, rest assured, all of the tribes and communities will be looking to you and your inspirations and the lessons learned.”

“What you’ve done will serve generations to come, not just us,” Daugherty said at the dedication. “We’re in the window for this to hit us now. We all know that the day is going to come. It’s not a matter of if, it’s when. The earth is going to shake violently, much more violently than any of us can even imagine, and the beautiful sea is going to pull back so we can hardly even see it. And that is going to be the time when the people who live here are going to rush to this tower, get up those stairs and they are going to be safe. And from the safety of that tower, people are going to watch as the ocean returns in its fury. And they will be alive and they will be in awe because they will be survivors of our nation’s worst natural disaster. That’s what we’re up against here.”

Corina Allen, the chief hazards geologist for the Washington Geological Survey, presented the tribe with a revised tsunami walking evacuation map showing the new tower in use – and all of the lives that could be saved.

“The level of cooperation between academia and the local, state and federal emergency management community is truly commendable,” Ufkin said. “It took considerable dedication from the Washington State Emergency Management Hazard Mitigation team, advisors from the University of Washington, FEMA and many others to bring this project to fruition. For that, the Shoalwater Bay Indian Tribe and citizens of Tokeland are deeply grateful.”